Bill Beswick was introduced to the YM by his older brother Fred ‘Mr YMCA’ Beswick – one of the most well known and respected member of the club for the past 72 years.

Bill has been a YM member for over 50 years and has gone from England basketball coach to team psychologist for the England Football Team. In fact much of the England football team planning between Bill Beswick and Steve McClaren took place here at the Manchester YMCA. 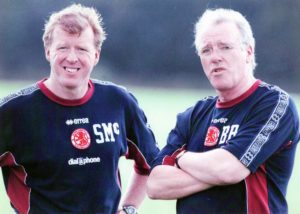 Here Bill describes his early impressions of the YMCA back in the late 1950’s:

‘It was just so exciting. Home was fairly basic, fairly drab although I was at grammar school by then, but the YMCA was just so exciting. There were so many sports, so much activity and because of brother Fred I had an ‘in’ with everyone. I was just Fred’s kid brother so I was safe and looked after and it just became the thing each day I waited for…I enjoyed school but I’d go home, get my homework done and then on the number 40 bus… thrupence for the bus fare to Manchester, thrupence for a cup of tea afterwards, thrupence for the bus fare home, nine pence – heaven!’