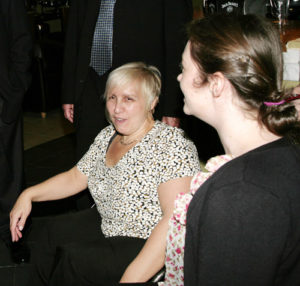 Josie coached the Mavericks wheelchair basketball club based at the Manchester YMCA. The club played in a national competitive league which includes teams in the U15′s, U19′s, women’s and mixed senior team.

Josie helped coach dozen’s of athletes over the years and has trained up at least 15 people who have gone on to become part of the GB team.

She had an incredible sporting career in her own right. She competed in 3 Paralympics (1984, ’88 & ’96) and held every British track record from 100 metres to the 5,000 metres breaking 28 British records. Josie completed in the London Marathon wheelchair race for a number of years before winning the 1989 race, and was one of the first women to break the 3 hour barrier. Josie then went on to be the Captain for the British wheelchair basketball team.

Here Josie talks about the camaraderie at the Y Club and how much it meant to her personally.